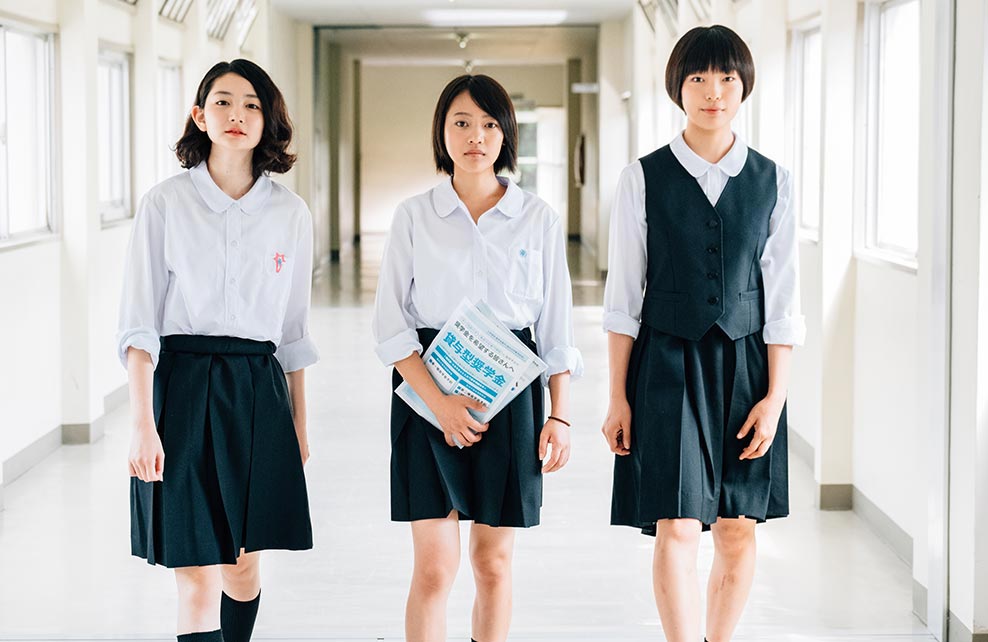 Trilogy from Japan at Cinemes Girona

From June 19th to the 3rd of July a selection of three Japanese independent cinema’s representative films will be screened at Cinemes Girona. Those are Demolition Girl (2019), Shell and Joint (2019) and Videophobia (2019), whose young protagonists live precariously in a consumer society that cannot absorb them. Cinema gives us images and experiences thanks to its communication power, in order to get to know more about these new generations. Recent Japanese cinema has a really recognizable style and a distinct personality that distinguishes it clearly from other cinematographies from the Asian continent.

Japanese economy’s precariousness strikes hardly against families with less purchasing power, like Cocoa’s, a high-school student that fights to overcome the difficulties with which she stumbles, never giving up. There isn’t a single day she does not work hard to open her a way, hoping for a better future.

Genta Matsugami (Hiroshima, 1981) graduated from University of Osaka in Video Editing. His last movie during the degree, Sanketsu no Umi, won the Publics’ Award in 2005 and was screened in various international festivals. In 2012 he founded the company bit-inc, to produce TV advertising, promotional videos and music videos. With Demolition Girls, his last film, Matsugami is looking forward to transmitting a message about the valid effort towards personal overcoming.

Nitobe and Sakamoto are childhood friends that work in a capsule hotel in Tokyo. Nitobe is interested in arthropodes and philosophy, while Sakamoto is obsessed with suicide. At the hotel they find every kind of clients and every kind of profiles: a Finnish mother who has lost her son, a fugitive and a student, among others. Every one of them reside in the same place and share the same commonal spaces between capsules, without never coming across each other.

Isamu Hirabayashi (1972) studied at the Univeristy of Musashino Art in Tokyo. First he worked as a graphic designer until he jumped to cinema direction. In addition to commercial cinema, he has never stopped directing independent cinema that has been recognized in festivals such as Cannes, Berlin and Venice.

Daisuke Miyazaki graduated from Wased University. He began his career as an assistant director next to Kiyoshi Kurosawa, until his debut as a director in 2011 with End of the Night.

Film series «East of Eden» at the FIRE!! Festival International Gay and Lesbian...

Cinema schedule at the project: «The Japanese Summer» in Lázaro Galdiano...
Scroll to top

This site uses some cookies. By continuing to browse the site, you are agreeing to our use of cookies.

We may request cookies to be set on your device. We use cookies to let us know when you visit our websites, how you interact with us, to enrich your user experience, and to customize your relationship with our website.

Click on the different category headings to find out more. You can also change some of your preferences. Note that blocking some types of cookies may impact your experience on our websites and the services we are able to offer.

These cookies are strictly necessary to provide you with services available through our website and to use some of its features.

Because these cookies are strictly necessary to deliver the website, you cannot refuse them without impacting how our site functions. You can block or delete them by changing your browser settings and force blocking all cookies on this website.

These cookies collect information that is used either in aggregate form to help us understand how our website is being used or how effective our marketing campaigns are, or to help us customize our website and application for you in order to enhance your experience.

If you do not want that we track your visist to our site you can disable tracking in your browser here:

We also use different external services like Google Webfonts and external Video providers. Since these providers may collect personal data like your IP address we allow you to block them here. Please be aware that this might heavily reduce the functionality and appearance of our site. Changes will take effect once you reload the page.